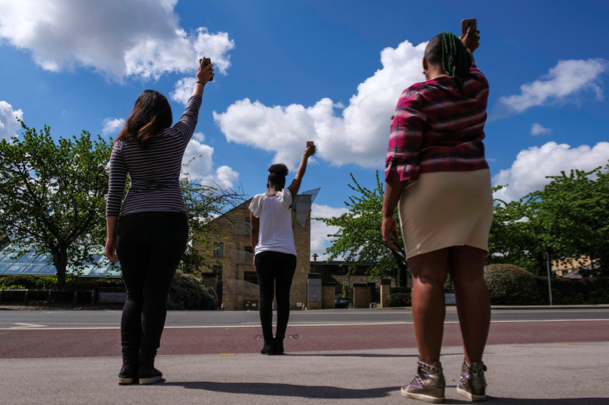 Although the UK’s immigration detention estate is one of the largest in Western Europe, what it’s like to be inside an Immigration Removal Centre (IRC) remains a mystery to most. Included in this mix are detainees’ relatives, their support workers, local councillors, concerned citizens, and interested academics like myself. Bucking a steady trend of allowing charities and community groups in to befriend and run workshops (see Music in Detention and AVID, the association of visitors to immigration detainees), researcher access is almost wholly precluded (for exceptions see works by Alexandra Hall and Mary Bosworth). Against this preclusionary standpoint, female asylum seekers living in Leeds answered my call to share their experiences with me. Mobile cameras are defiantly fixed on a UK Border Agency site, as women provide this article’s micro-lens on life inside the IRC.

Simply put, this research is a show and tell project – to hear what women have to say about their detention experience and visualise key narratives through photography to maximize their impact. Publicly available data on immigration detention tends to be quantitative and available or not, on Home Office (HO) websites, through government-commissioned reviews, and in Her Majesty’s Inspectorate of Prisons (HMIP) reports. Contrary to fears that ex-detainees might be nervous of talking detention with me, these women genuinely welcomed the academic interest, demanding to know why it had taken so long. Our semi-structured conversations lasted between two and three hours, with a drink and a bite mid-way to sustain us. The decision to close down the call after the fifteenth participant was based on narrative saturation and not insufficient interest. For this blog, I therefore want to set academic theories of Agamben and Foucault to one side and reflect on the in/exclusionary dynamic which runs through women’s narratives. By this, I mean their accountability (inclusion) under immigration laws and regulations and simultaneous denial of (exclusion from) entitlements and protections under citizenship.

Listening to women’s stories reminds us that these centres are intended to hold for removal persons without a legal entitlement to be in the UK (as indicated in their renaming from immigration detention to immigration removal centres under the Nationality, Immigration and Asylum Act, 2002). The fact they provide facilities like a gym, hair salon, shop, or computer room does not distract from the reality of being confined without a criminal charge. As Trinity from Nigeria remarks, such facilities make for a ‘glorified’ prison environment but it’s still a prison. Women in search of sanctuary relay confinement in an IRC as punishment, with all its inherent pains and losses – family separation, social exclusion, fractured identities, controls and captivity. Importantly, such comparisons with prison and punishment enable women to raise a critical commentary on the ethicality and legitimacy of their immigration detention. As Kia from Uganda puts it:

There was one lady mixed in with us who was classed a foreign national, who killed her husband and her child and who had a history of fighting the guards. She said the toughest place they brought her was the IRC. (Laughs) How can this be right when it’s not a prison and we are not criminal?

But looking at centre routines and practices under the micro-lens of lived experience also raises the fragility of this imposed in/exclusion, firstly across a heterogeneous detainee population and, secondly, between citizen and non-citizen. Unlike ethnic and religious divisions observed in other studies (Bosworth and Kellezi), many describe the kindness of existing detainees towards them on arrival. Joli – a Christian from Namibia – recalls languishing in her room until a Kenyan detainee and professed Muslim showed her where to eat and how to use the computer room. Kia – an Anglican from Uganda – describes arriving with nothing bar the clothes she is arrested in, to be given a wrap by a Russian Orthodox Christian. Inside the walls of the IRC and across such a diverse social group, this kindness magnifies an administrative indifference for ethical care and social belonging (as felt in the removal of mobile phones with cameras and picture galleries; restrictions on free association; and the severance of emotional and community ties). In spite of these segregating measures, women’s affiliation in faith-related networks outside the IRC subverts feelings of non-belonging in wider society, since all faith groups (Mosque, Church, Synagogue) are tasked with prayerful and charitable obligations towards their members. As Kia from Uganda explains:

My local church was like a small community praying and campaigning for people like me. When I had a problem inside they rang round to get legal advice, and when I was to be released they arranged for me stay in the vicarage.

This said, Stonewall has flagged up an absence of faith-inclusive support inside and outside detention for LGBT persons – a shortcoming in need of greater research inquiry.​

In summary, the value of a micro lens on the IRC is the critical commentary on aspects of legitimacy, social exclusion, and ethical care raised through this medium. This, in turn, queries the necessity, efficacy, and defensibility of placing people seeking asylum inside these institutions. Until the Home Office and custodial companies relax their entry restrictions on researchers, it is left to remarkable women like these to make their own plight known and raise a critical challenge of continued asylum governance along present lines.

The photograph – courtesy of the author and Jeremy Abrahams is part of an ongoing visualisation of asylum lives in and beyond immigration detention.