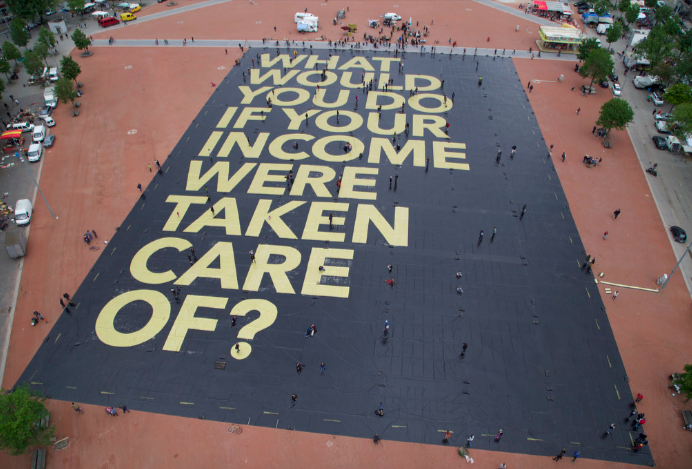 This blog is based on an article in the Journal of Social Policy.  You can access the article by clicking here.  A version of this blog was first published at In the Long Run.

Universal Basic Income (UBI) is perhaps the most talked-about idea in British social policy today. Over the last five years, the possibility of introducing an unconditional, non-withdrawable payment to every citizen has emerged from the margins of the political agenda to attract supporters from across the ideological spectrum. Anthony Painter and Chris Thoung of the Royal Society of Arts, the acceleration theorists Nick Srnicek and Alex Williams and the left-wing journalist Paul Mason have all highlighted the potential for UBI to transform the relationship between paid work, care-giving, creativity and leisure in an age of automation. The Green Party put it at the heart of its 2015 and 2017 general election campaigns, and the Labour Party set up a working group a year ago to explore the implications. ‘All of a sudden’, Shadow Chancellor John McDonnell has noted, basic income is ‘an idea whose time may well have come’. Four Scottish councils are now hoping to develop pilot schemes with the help of a £250,000 grant from the SNP government.

This surge of interest in UBI is part of a much larger global phenomenon, which reflects dissatisfaction with complex and coercive social security regimes and the growing use of cash transfers to tackle poverty in the developing world. Many British enthusiasts are closely engaged with international campaigns through the Basic Income Earth Network and UBI Europe and have been inspired by recent experiments in Namibia, India, and Finland. Yet the contemporary British debate also draws on a much longer history of interest in the idea which dates back at least to the end of the First World War, when Bertrand Russell called for a ‘vagabond’s wage’ in his book Roads to Freedom and a Quaker couple, Mabel and Dennis Milner, formed the State Bonus League to campaign for a weekly payment of 5 shillings per person, ‘just sufficient to maintain life and liberty’. Despite the vast literature on the development of the British welfare state, this history is little known and poorly understood. When and why has UBI come on to the policy agenda in Britain? How has the concept been shaped by wider changes in the UK economy, welfare provision and party politics over the past century?

In a new article published in the Journal of Social Policy, I have used a mixture of interviews and archival research to begin answering these questions. In researching the subject, I have been struck by three main themes. Firstly, the long history of UBI in British politics has been neglected partly because the idea has been conceptualised in such a variety of ways. Bertrand Russell, for instance, saw a ‘vagabond’s wage’ as a foundation for artistic creativity and personal freedom, but interwar market socialists such as G.D.H. Cole and James Meade were more interested in using a ‘social dividend’ to distribute the profits of nationalised industries, whilst the Liberal-turned-Conservative activist Juliet Rhys-Williams proposed a tax-funded UBI as an alternative to William Beveridge’s social insurance scheme. Conceptions of what a basic income should involve continue to vary widely. Should it provide a small foundation for work or a comfortable subsistence? Should it replace existing welfare benefits and services or be paid alongside them? Should we see UBI as a way of strengthening trade unions’ bargaining power, or allowing governments to embrace the growth of ‘gig economy’ firms such as Deliveroo and Uber?

Secondly, the article argues that UBI campaigning in Britain has had a distinctive character which reflects the centre-right background of many of its exponents. Much of the contemporary enthusiasm for basic income has been ‘utopian’ in character, taking its cue from egalitarian and left-libertarian conceptions of distributive justice and looking forward to a radical shift in attitudes to work and leisure – just as Bertrand Russell did a century ago. The Belgian philosopher Philippe van Parijs’ attempt to justify ‘why surfers should be fed’ typifies this approach to the subject.

Until the 1980s, however, many of the leading British campaigners for UBI were liberals or conservatives, who saw the idea as a free-market alternative to wage regulation and other forms of welfare provision. The economist John Kay has characterised this philosophy as ‘redistributive market liberalism’: the belief that poverty and inequality are best alleviated through transfer payments outside the market system. Indeed, trade unionists and social democrats have often dismissed basic income advocates as dangerous cranks – ‘the Jehovah’s Witnesses of social policy’, in Rory O’Kelly’s resonant phrase – for precisely this reason. Jon Cruddas and Tom Kibasi, for instance, have characterized UBI as a Trojan horse for neoliberalism, which would ‘discourage work’, ‘perpetuate inequality’ and hasten ‘the total, final and irreversible atomisation of labour’. Although the Green Party and anti-poverty activists have canvassed support for UBI since the 1970s, it is only in the last decade that interest in the idea has moved decisively to the left of the UK political spectrum, as radicals have reacted against the fraught implementation of Universal Credit and the stigma and indignity imposed on claimants by the current benefit system.

Thirdly, this historical evidence helps us understand why UBI has moved back up the political agenda in the years since the 2008 financial crisis. Support for basic income has always been cyclical in character, intimately tied up with debates about the future of work and the organisation of the labour market. UBI has tended to attract most support at times when the prospects for full employment and living wages have seemed most uncertain – as in the 1940s, 1980s and 2010s – and to recede from view when governments have managed to forge sustainable employment regimes. If mainstream politicians are able to manage the impact of automation and secure political support for the growth of more flexible, fragmentary patterns of work, perhaps underpinned by conventional wage supplements and ‘welfare-to-work’ schemes, then the current interest in UBI might be no more than a passing fad. Yet basic income campaigners also have grounds for cautious optimism. Support for the idea is more ideologically contiguous than in the past, and it shows signs of becoming a totemic policy for some left-wing activists, particularly in Scotland. If the pilot schemes show promising results, the SNP might well press for Westminster to give Holyrood the powers required to roll UBI out more widely. Such a ‘policy laboratory’ approach could at last turn a century-old vision into a social and political reality.

Peter Sloman is Lecturer in British Politics at the University of Cambridge and a fellow of Churchill College.  He was written extensively on British liberalism and public policy, and is currently writing a book on the politics of guaranteed income.