Health-related unemployment and sickness absence are key policy priorities in the UK, as in many nations. At 32% points the UK’s disability employment gap is amongst the largest across the advanced economies – 81% for individuals without a disability compared to 49% amongst individuals with a disability. And around 70% of the UK’s working age population who are unemployed and in receipt of key out-of-work benefits have a health condition or disability.

In response, the Government have committed itself to the ambitious target of halving the disability employment gap, has penned the Improving Lives Green Paper and formed the innovative joint Work and Heath Unit (WHU) between Department for Health and Department for Work and Pensions to help achieve it.

As part of its work the WHU have supported two large randomised health-led employment trials into modified versions of a model of employment support for individuals with severe mental health conditions inside secondary mental health services that is well-evidenced to be highly effective – Individual Placement and Support (IPS). Working with colleagues in Sheffield City Region and beyond this author led the codesign of the WHU trial in our region. This WHU modified IPS seeks to mainstream the lessons from traditional IPS into larger and more diverse health cohorts and settings. In the short-term they promise an enhanced model of evidence-based voluntary modified IPS employment support to residents of those areas. In the medium-term their real potential is in generating a robust evidence base to inform the much-needed transformation of the UK’s current problematic approach to employment support for individuals with health conditions – largely absent, otherwise relatively shallow, depersonalised and ineffectively detached from health services.

From traditional IPS to modified IPSs: unpacking the potential for qualitative variation in model

IPS is an intensive, voluntary, coproduced employment model that works to a 25-item fidelity scale and is oriented around 8 principles. These principles cover key service features and aspirations such as its place then train approach, integration into clinical teams, proactive employer engagement and attention to service user’s preferences and choices.

IPS has been demonstrated to highly effective in multiple RCTS and core to its essence is its 25-item fidelity scale. This gives both a list of key model features as well as a scoring system that IPS services can judge their adherence to the IPS model – more points means greater IPS fidelity which is taken to associate with improved employment and health outcomes for service users.

Whilst highly effective, IPS is its traditional form is niche however and unsuited to larger and more diverse health cohorts outside of IPS provision but also in need of more effective employment support. Hence the interest from policy makers in taking the kernels of IPS and modifying it. As a consequence, part of our work in the SCR trial was the co-creation across local, regional and national policy colleagues and service users of a modified IPS fidelity scale suitable for the changed cohorts, volumes, settings and functions of our modified IPS trial. Though in the main identical to the traditional IPS fidelity scale there were some necessary and/or beneficial changes to some fidelity items. Key amongst them were how best to deliver key IPS functions around employer engagement, health support and wider supports (e.g. housing, debt, family support) within the context of a now large service within a wider local policy ecosystem? Where models seek to deliver all such functions themselves they might be described as ‘discrete’ in approach; where the seek to connect with and draw these functions from existing wider teams and services they might be described as ‘integrated’ in approach. The following framework for mapping modified IPS service can be drawn therefore: many fidelity items continue to operate as ‘better or worse’ items up or down the vertical fidelity score axis just as in traditional IPS; across the horizontal axis however one has choices along this integrated to discrete axis about how one wishes qualitatively to build the modified IPS service dependent upon one’s particular local context, aims and cohorts as these are better understood as ‘different but equal’.

Whilst we opted for one particular modified IPS model in our SCR trial, what the trial co-design process highlighted analytically is the existence of multiple equally valid alternative modified IPSs depending on the design choices one makes. This is unlike traditional IPS where only one model vision exists. This potential variability in equally valid modified IPS models brings challenges for policy makers where no design guidance exists. Hence an objective of my research has been to create a design roadmap for policy makers as to what the alternatives are, how to decide given your own context and what the fiscal cost-benefit positions of each alternative model might be.

Recognising that variability, what one can then do is explore in greater detail their operational needs and costs of alternative designs in order both to inform design and commissioning as well as to examine their fiscal cost-benefit positions. The figure below populates the above framework with 12 alternatively specified modified IPS models. Across the horizontal axis the models are equally valid but vary qualitatively in how integrated (far left) or discrete (far right) they are in the delivery of key functions (and fidelity items) relating to health needs, wider supports and employer engagement. Along the vertical axis models become more desirable in terms of fidelity (and more expensive) as keyworker’s target caseloads shrink: 30 in the bottom row, 25 in the central roe, 20 in the top row. For reference, these are in the range of traditional IPS services (which prefer caseloads below 20) and all compare favourably with the UK norm of caseloads of around 100 in standard Jobcentre Plus or contracted employment support.

Clearly the staffing requirements (which dominate the costs) decrease both as caseloads increase (moving downwards) and as the model becomes more integrated in its approach (moving leftwards). Thus, depending approach taken average unit costs might vary between £1,200 and £3,500. For reference, whilst the precise values are not known publicly DWP’s current Work and Health Programme is believed to have average unit costs in the region of £2,000 or slightly higher – a radically different model built around quasi-markets, Prime providers and without the principles or fidelity that IPS models see. Thus, given that many of these modified IPS models are comparable in price to that very different DWP contracted employment model one key question for coming years becomes which delivers better outcomes and experiences for what are comparable cohorts. 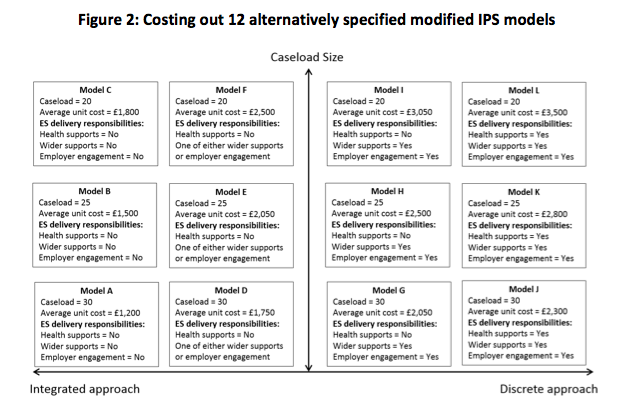 Knowing costs, one can then estimate a cost-benefit position for each model scenario across varying levels of potential performance. Green denotes net savings (1 equates to break-even point, 2 to savings twice as large as costs, etc) and red denotes net costs. These CBA estimates are based on estimates of the benefit savings and tax payments from employment outcomes. Clearly, less expensive models more easily deliver savings at a given level of performance but there is expected to be a relationship between increased resources and higher performance. As benchmarks, business-as-usual Jobcentre Plus performance is around 10% employment outcomes for these kinds of low to moderate health cohorts. This compares with around 20% employment outcomes for the best performing locally integrated approaches in Mayoral Combined Authorities. Traditional IPS services see far higher outcomes of over 50% but this in part reflects their differing measurement of outcomes. Broadly speaking, 20-30% employment outcomes is certainly achievable in modified IPS services.

The cost-benefit analyses highlight that many of these modified IPS models deliver savings with employment outcomes in that achievable 20%-30% range. At 25% outcomes performance an average unit cost of just over £2000 breaks even financially. Interestingly, this is well in excess of the resources made available to Jobcentre Plus to support each such service user – despite the positive gains of this intensive voluntary support and employment transition for the service user themselves as well as the £15 billion annual benefits bill for ESA payments.

Employment support policy alone cannot provide all the solutions to the UK’s sizeable health-related (un)employment challenge – employers, the health system, demand-side policies all also have key roles to play. But well-considered, evidence-based employment support models tailored to, and effective for, the needs of service users with health conditions and disabilities will inevitably be a necessary part of any positive transformation.

Taken together the research summarised here show both that alternative well-evidenced voluntary models of employment support based on IPS principles are available and modifiable for mainstream health cohorts and that from a fiscal perspective the economic case for investment in such approaches compared to the status quo stacks up.

Mainstreaming and modifying the lessons from IPS models would be a sensible move for national policy makers in the UK given how polar opposite the current UK employment support regime is for unemployed individuals with health conditions from the well-evidenced effectiveness and key principles of IPS approaches – voluntariness, person-centred, user-choice, co-produced, intensive, integrated, adequately resourced. Evidence-based progressive change is possible, affordable and long overdue.

Adam Whitworth is Senior Lecturer in Human Geography at the University of Sheffield.